In 2008, we were inspired by the hit reality TV series, Oprah’s Big Give. The contestants on the show were given a sum of money each week, and competed to come up with the most creative ways to make a difference in their community. We decided to come up with our own version of the show and we called it, “TSA’s Big Give”.

The success of TSA’s Big Give in 2008 has since motivated our staff to participate in an annual company-wide fundraising effort. While we continue to use the concept of Oprah’s Big Give, the month-long fundraising challenge creates an opportunity for our entire company, alongside our residents, to use our own creativity and innovation to make a difference in the community.

Big Give 2019 supporting The Giving Spirit

In 2019, Thomas Safran & Associates celebrated their 12th Big Give anniversary and partnered with The Giving Spirit, whose mission is to aid the homeless community through direct volunteerism. The TSA staff joined to assemble, pack and distribute backpacks filled with survival kits for children, women, and families living on the streets of Los Angeles. These kits contain over 70 individual items that aid homeless persons in their time of need. Staff distribute kits to the most at-risk homeless populations and form human connections with each recipient by not only giving the kit away but by also asking the recipient “who they are” and “how can we help?”.

Thomas Safran & Associate staff members, residents of each community building, and sponsors provided thousands of needed survival kit items (toiletries, clothing, food, and outside survival gear) and raised over $177,000 to supply The Giving Spirit with the needed funds to expand their volunteering operation.

On Wednesday, September 11, 2019, Thomas Safran & Associates’ 200+ staff members participated in a day of service by joining The Giving Spirit at their distribution center. We assembled hundreds of survival kits then took backpacks to distribute to those homeless in their neighborhoods. Over 600 backpacks were distributed and the lives of those receiving the kits and staff members giving the kits were changed. Thomas Safran & Associates caught “The Giving Spirit”.

In 2018, Thomas Safran & Associates partnered with Project Angel Food, whose mission is to feed and nourish people impacted by serious illness. Volunteers and staff at Project Angel Food cook and deliver nutritious meals free of charge to homes throughout Los Angeles County to alleviate hunger, prevent malnutrition and return their clients to health. In the past year alone, Project Angel Food delivered over 500,000 meals to clients with a medical diagnosis such as cancer, HIV/AIDS, congestive heart failure, and other diseases. Meals are medically tailored and help underserved people who are too ill to shop or cook for themselves.

With the enthusiastic support of staff, residents and sponsors, we were able to raise over $165,000 with the addition of over $50,000 worth of in-kind donations including food, art supplies, toiletries, books and more for Project Angel Food.

On Tuesday, September 11, Thomas Safran and Associates' 200 staff members participated in a day of service at the Project Angel Food headquarters in Hollywood, CA. We created a staff lounge, updated meeting spaces, painted murals, cooked meals, and built a tranquil outdoor seating area. These projects will help create a more engaging and inviting space for the nearly 2,000 volunteers and staff that support Project Angel Food.

For the 10 year anniversary of the Big Give, Thomas Safran & Associates partnered with City Year Los Angeles. City Year is a national, education-focused organization that for 30 years has been partnering with public schools to keep students in school and on track to graduate high school. AmeriCorps members drive City Year's mission forward by providing hours of mentorship and academic support to every child enrolled in their program. In 2016 alone, City Year Los Angeles served 28 underserved Los Angeles Unified School District schools and provided support to over 27,000 students.

The incredible fundraising efforts of staff, residents, and partners enabled us to reach our goal of over $150,000 with the addition of over $50,000 worth of in-kind donations including school supplies, backpacks, books and more for City Year Los Angeles.

On September 11, 2017, Thomas Safran & Associates’ donated over 1,500 hours to beautify Markham Middle School in Watts, a City Year school site since 2011. We renovated the exterior of the school with murals, expanded the garden area by refurbishing benches and tables and built an outdoor shade structure, created a new teacher's lounge, and added key items to a City Year classroom like a new SmartBoard.

This year, our goal was to support the seniors who attend the center on a daily basis by furthering their quality of life and creating a safe haven for them in South Los Angeles. With overwhelming support, Thomas Safran & Associates raised over $130,000 and collected over $50,000 worth of in-kind donations, including art supplies, blankets, health and wellness supplies, books, games and more for The Theresa Lindsay Senior Center.

On Friday, September 9, 2016, Thomas Safran & Associates’ 180 staff members donated over 1,400 hours to beautify Theresa Lindsay Senior Center. We renovated the exterior and interior of the senior center, added security cameras and a perimeter fence, removed graffiti, repaired industrial refrigerators, freezers and air conditioning units and created movie and exercise rooms. The contributions of our staff, residents and partners truly transformed the center and helped create a space of life-changing experiences to thousands of low-income seniors in South Los Angeles.

In 2015, Thomas Safran & Associates supported Camp Bob Waldorf on the Max Straus Campus and the YMCA's Camp Whittle in a "Kids to Camp" fundraising campaign. Both camps provide memorable, life-changing experiences to thousands of underserved and low-income youth in Los Angeles County and will never turn a child away from attending camp because of their family's inability to pay.

The tremendous fundraising efforts of staff, residents, and partners reached over $106,000 and donation drives raised over $50,000 worth of in-kind donations including camping equipment, art supplies, sports equipment, games, and toys for both camps.

In 2014, Thomas Safran & Associates partnered with Hillsides, a non-profit organization dedicated to improving the overall well-being and functioning of vulnerable children and foster youth in Los Angeles County. Their mission is to provide high quality care, advocacy, and innovative services that promote safe, permanent environments where young people can thrive.

Generous contributions from Thomas Safran & Associates staff, residents and partners enabled us to raise over $96,000 and collect over $50,000 worth of in-kind donations including books, school supplies, sports equipment, clothing, toys and more to support the 7,000 at-risk foster children and families that Hillsides serves annually in Los Angeles county.

On September 11, 2014, Thomas Safran & Associates donated over 1,300 hours to beautify Hillsides main campus in Pasadena and host a carnival for the children. We provided an afternoon filled with carnival games, music, food, prizes, books and backpacks, face painting, a photo booth, dunk tank, rock wall, inflatable obstacle course, stilt walker and much more. The carnival was a huge success and provided a memorable experience for every child.

Child Welfare League of AmericaCorporate Advocate of the Year Award

In 2013, Thomas Safran & Associates partnered with St. Joseph Center, a non-profit organization in Venice, CA whose mission is to provide working poor families and homeless men, women, and children of all ages with the inner resources and tools to become self-supporting members of the community.

With the help of staff, residents, and partners, Thomas Safran & Associates raised over $53,000 and over $50,000 worth of food donations, clothing, hygiene items, baby products, and more for the thousands of people that visit the center each year.

Thomas Safran & Associates staff and residents were challenged to do the following:

As a result of TSA’s contributions, thousands of struggling families, adults, and seniors will continue to benefit from the free services that St. Joseph Center provides such as long term case management, nutritious meals and groceries, clothing, and mental health resources. 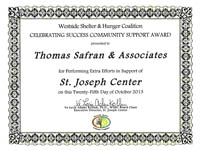 In 2012, Thomas Safran & Associates partnered with the LA Parks Foundation to accomplish the goal of improving underserved parks in Los Angeles.

Thomas Safran & Associates staff and residents were challenged to do the following:

On September 27, 2012, the entire Thomas Safran & Associates team volunteered to help revitalize Denker Recreation Park. As a result of the service day, children, families and seniors who reside in the local community will now enjoy a recreation center and park that features an upgraded baseball diamond, community gardens, a renovated gym, enhanced learning and teen centers and much more.

Thanks to Thomas Safran & Associates' effort, funds will be earmarked for deserving youth to attend the Center’s after-school programs, and to participate in their sports leagues. Additional funds will go towards other underserved parks in Los Angeles.

City of Los AngelesCertificate of Appreciation

In 2011, Thomas Safran and Associates focused on the theme of education. We selected three organizations that would help to accomplish our goal of helping at-risk youth succeed in schools throughout Los Angeles County.

Together, with the residents, we raised over $42,000 for Operation School Bell, LA Works, and Andrew Carnegie Middle School. In addition, we raised over $50,000 worth of school supplies and received over 10,000 childrens' book donations.

Since 1991, L.A. Works has organized Southern California’s corporate and community volunteer power by providing more than 1 million hours of service to communities throughout Los Angeles.

Andrew Carnegie Middle School is a public school located in Carson, CA, home of many foster and low-income students. It is one of 183 middle schools in the Los Angeles Unified School District and serves 1,500 students from 6th grade to 8th grade.

Big Give 2010 supporting Habitat for Humanity of Greater Los Angeles

Thomas Safran & Associates partnered with Habitat for Humanity of Greater Los Angeles in 2010. Our employees and residents raised over $34,000 and donated over 800 hours to build homes at five different sites in the Greater LA area. These efforts funded one quarter of the cost to build a brand-new house and ensured thirteen deserving families a home in time for the holidays.

Our staff and residents held various creative events that helped us reach our fundraising goal. The following are examples of their efforts:

About Habitat for Humanity
Habitat for Humanity of Greater Los Angeles (HFH GLA) strives to eliminate poverty housing through advocacy, education and partnership with families in need to build simple, decent, affordable and sustainable housing. Since 1990, HFH GLA has built and renovated over 630 homes locally and worldwide, transforming the lives of hundreds of individuals.

Thomas Safran & Associates employees and residents raised over $30,000 and donated 17,000 pounds of food in a single month, all proceeds benefitting the Los Angeles Regional Foodbank.

We were challenged by the foodbank to provide one of the three things they needed most: monetary donations, food donations, or volunteers at their warehouse distribution center. Rather than choosing one item, we decided to take on the challenge of all three.

We are incredibly proud and inspired by our staff and residents. We are humbled by 2009’s “Most Innovative Partner” award from the LA Regional Foodbank, saluting our creative fundraising efforts.

About the LA Regional Foodbank:
The Los Angeles Regional Foodbank is a non-profit, charitable organization established in 1973 and is one of the largest food banks in the United States. Through a network of 580 charitable agencies providing service from over 1,000 agency sites, the Foodbank supplies enough food for 800,000 meals each week throughout Los Angeles County. The Foodbank is a partner with Feeding America. 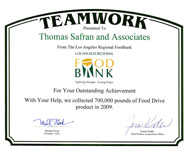 Inspired from the hit reality TV series, Oprah’s Big Give, each property manager was given $500 to positively impact their residents and/or local community.